‘We Didn’t Expect to See You’: Racism and Profiling on Katahdin 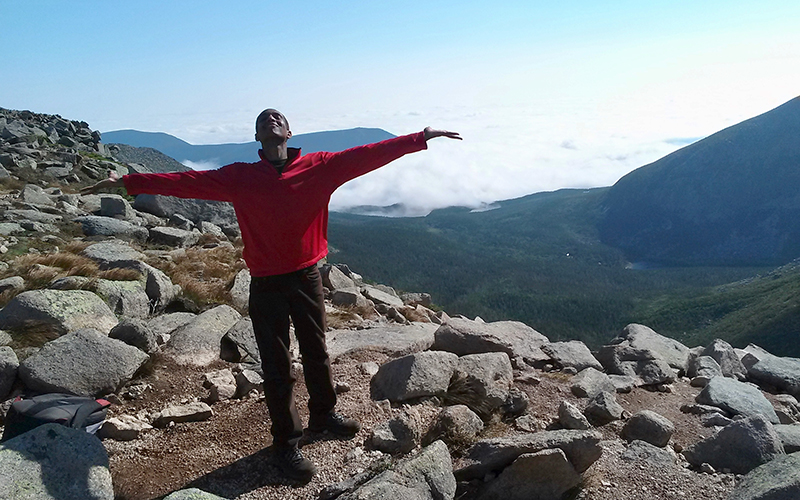 Photo courtesy of Juan Michael Porter IIThe author on one of his many fast hikes to the summit of Katahdin, where he says he’s experienced several instances of racism and stereotyping.

I’ve loved embarking on outdoor treks ever since I was 14 years old. What started with me sneaking onto El Toro Marine Base near Irvine, Calif., to run through its adjoining wildlands has evolved into hikes on Pikes Peak, the James Irvine Trail, and my favorite site: Katahdin.

The first time I attempted the ascent of Maine’s highest mountain (elevation 5,269 feet), I was 28 years old. I made it to Baxter Peak, 5.2 miles from the trailhead, in under 4 hours. At that point, I was so in love with taking in the unconquered beauty surrounding me that I didn’t mind the fact that my hiking partner was slowing me down. Leisurely strollers can handle the elevation gain in about 8 hours but outdoor warriors have tracked times as swift as two and a half hours. In the following years I’ve returned several times to Katahdin by myself, intent on making it to the top even faster than I did before.

Unfortunately, Katahdin’s natural obstacle course isn’t the only challenge I’ve faced. On my initial solo trip, it was suspicious glares that a couple kept throwing my way. You see, I’m Black.

The couple’s stares were borderline comical. Every few steps, they stopped and glanced back in my direction as I caught up to them on the trail. I responded by stopping and looking around for the invisible point of fascination. I surmised that it was either a giant spider on my head or a yeti standing behind me. 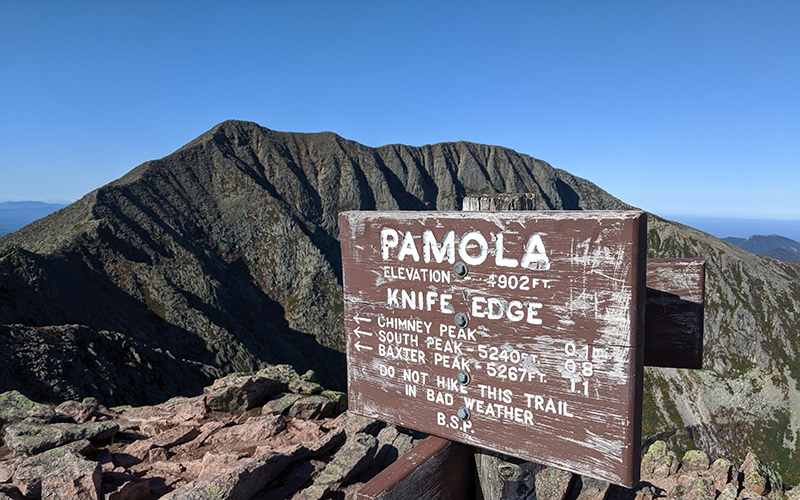 They Were Staring Because A Black Man Was Following Them

I’m really fast, so I commonly overtake hikers ahead of me. On Katahdin, I’m even faster than the average hiker because I hop like a billy goat over the gaps between rocks. Trying to play it cool, I decide to show-off my athleticism. I jaunt past the couple as they stand watching in awkward silence. I stop and turn to say hello and am greeted by the couple flinching back in unison. I do not have a gun, but they look as if I’d just pointed one in their direction.

What annihilates my delusion of coolness is an encounter later on the same hike with three women, who start speaking at me very loudly as soon as they see me. It feels like they are trying to alert anyone in the vicinity that a threat has entered the space. I stop dead in my tracks as they alternate between demanding that I get away and asking, “What are you doing here?” It was nerve-racking, to say the least.

Rather than continue, I sit down and pull out my canteen to rehydrate. Interestingly, the canteen inspires the group to stop belly-aching and ask where I got it. Not feeling particularly sociable, I respond, “Is there a reason that y’all were screaming at me?”

“You surprised us,” one replies. “We didn’t expect to see you.” 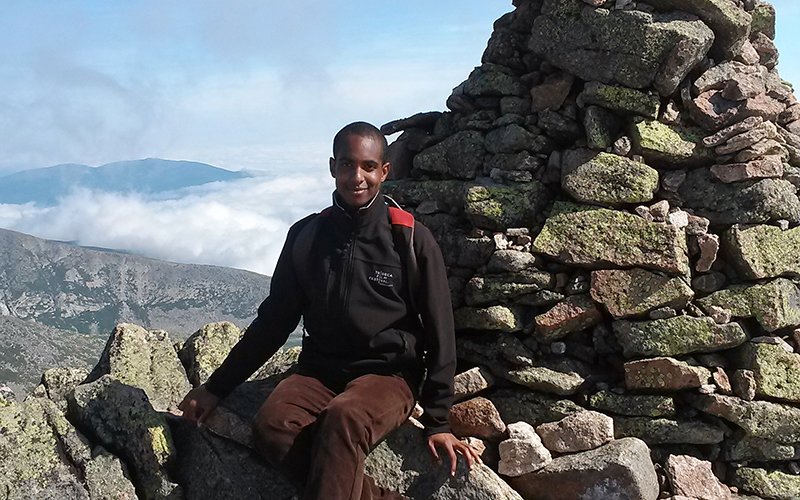 Courtesy of Juan Michael Porter IIThe author at the summit of Katahdin.

The only thing surprising about me in relation to everyone I’ve encountered during my Katahdin hikes is that I am usually the only Black person around. Maine is almost 95 percent white. Couple being Black with my being gay and in love with the Maine’s Millinocket region, and you’ve got a unicorn on your hands.

I love being outdoors. I hate that my sweat creates a chilly layer in my clothing the higher I go but love knowing that it’s a sign of how hard I’ve worked; that is, until I’m forced to engage with white people interrogating me about what I am doing outside.

If you’ve grown up watching American television, the impulse to react negatively to Black people is easy to understand: How often do we see nature programs or movies featuring people of color? On the flip side, how often have we seen Black people portrayed as urban-dwelling bad guys more interested in selling marijuana than in feeling their lungs burn from a fast climb?

All things being unequal, I have a similar fear of white people assuming that I am up to no good. I’m not paranoid; I’m numb from seeing white male police officers beat people who look like me because they decided that we breathed too quickly. That same fear floods my lungs when I am alone in an elevator with a white woman clutching her purse because I pressed the elevator button. It’s why I rush past or cross the street whenever I encounter a white woman in New York City, my home, lest my Blackness trigger her to threaten my life.

But when I am outside, I assume we are all there to challenge our stamina and enjoy the payoff of watching an endless cascade of clouds spill across the horizon. I go hiking not just to best a previous version of me, but to connect with the can-do spirit of my fellow climbers. It is never easy; sometimes I slip while jumping from one rock to another or trip and smash my knee. But I never regret that I am giving my all to the world—except when I’m treated like a highway bandit. 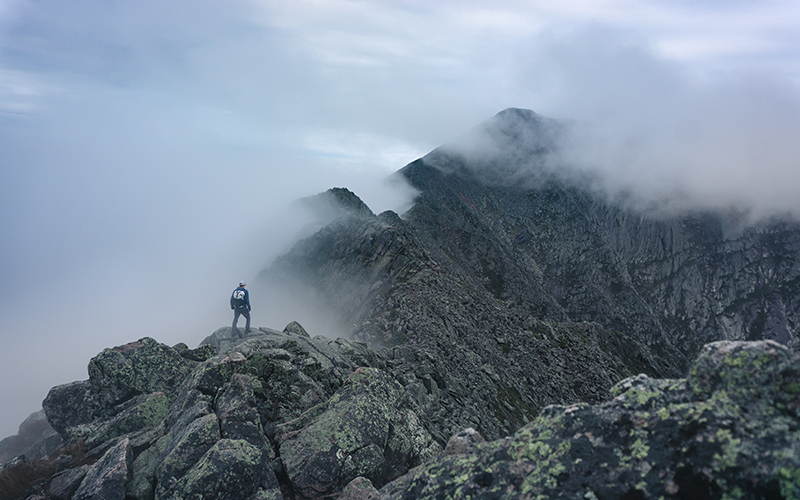 Confrontation on the Edge

My first time on the Knife Edge trail, I got into a standoff with an older gentleman who insisted that I was following him. I was; he was in front of me on the narrow trail—which drops off precipitously on one side—and there was no way that I could speed past him.

Eventually I gave up, turned around, and completely re-routed my trail. That day it took me five hours to get to the top of Baxter Peak. When I finally arrived, I encountered the older gentleman. He apologized and told me that being on the Edge alone with me made him nervous. I told him that a stranger screaming at me made me nervous. He laughed. I walked away and made the treacherous descent so quickly that I nearly compressed my spine from jumping down to rocks without bracing myself.

If you are unfamiliar with the phenomenon of Black hikers, I want you to know that we are out here, and much like you, we just want to enjoy the open air without having to deal with anyone else’s nonsense. The next time I visit Katahdin I hope my fellow hikers keep the following in mind: The savage assumption that I am a threat is something I deal with every day. Please leave your profiling at home alongside your other troubles and let me hike in peace.

The post ‘We Didn’t Expect to See You’: Racism and Profiling on Katahdin appeared first on Appalachian Mountain Club.