Harvell Dam was removed in June 2014 as part of a broad effort to restore fish passage in Virginia and the Chesapeake Bay. Removal of the dam has provided species of migratory fish with unimpeded access to the Appomattox River, restored a section of the river to a natural state and enhanced recreational and economic opportunities for the City of Petersburg and the surrounding area. 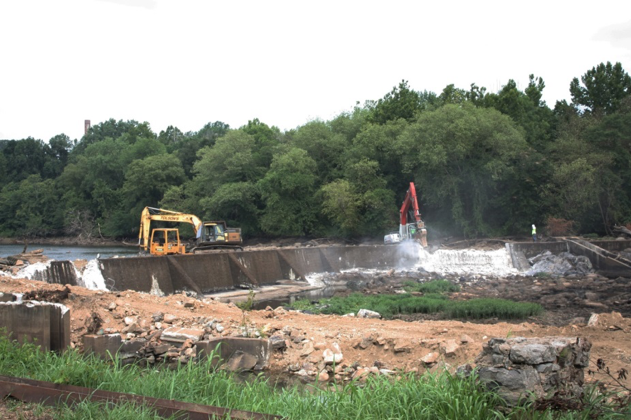 The Appomattox River flows through central Virginia from the western border into the Chesapeake Bay. It provides critical spawning and rearing habitat for migratory fish, including American shad, hickory shad, blueback herring, alewife, striped bass and sea lamprey. It also hosts many other aquatic species, including American eel and freshwater mussels.

When Harvell Dam was constructed in 1930, no plans were made to accommodate fish passage, completely restricting species from reaching an astounding 127 miles of habitat upstream. As a result, Harvell Dam was identified by the Commonwealth of Virginia, American Rivers and others as the most critical fish passage site on the Appomattox River, and one of the highest priority sites for migratory fish restoration in Virginia. Unfortunately, three other dams are still present upstream of Harvell Dam, although these dams do allow for fish passage.

Originally constructed to produce electricity, the dam was decommissioned in 2003 when the Federal Energy Regulatory Commission (FERC) initiated license termination with the owners, who eventually granted an access easement for the purpose of removing the dam.

It took more than a decade of negotiations and planning between FERC, Virginia Department of Game and Inland Fisheries, American Rivers, U.S. Fish and Wildlife Service and others before the dam removal began in July 2015, almost five years after the original planned construction date. Harvell Dam site before (top) and after (bottom) removal, August 2015.

The removal of Harvell Dam was one more step forward towards restoring fish runs in Virginia. This restoration project illustrates that removal of outdated hydropower facilities is possible with perseverance. It also exemplifies the importance of removing outdated structures that have become barriers to fish and other species.