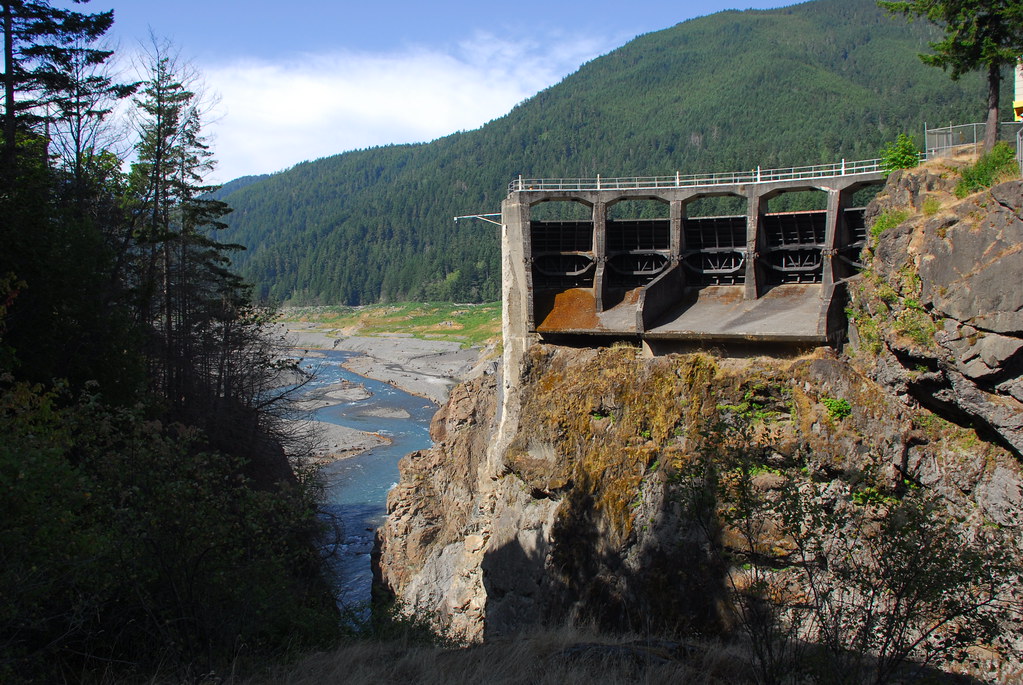 The Elwha River is unique among rivers of the Olympic Peninsula with a watershed that represents approximately 20% of Olympic National Park and headwaters reaching to the very center of the Olympic Mountains. These mountains were formed by the domal uplift of marine sedimentary rock and basalt that the powerful Elwha River has carved its way through. The rich geologic diversity that resulted has been sculpted by the action of flowing water, the errosive power of sediment, and the persistent grinding action of the glaciers that have all shaped the landscape. The Elwha River of recent geologic history has all the attributes of river that is well suited for the suite of species that comprise the Pacific salmon, its deep canyons and diverse geology create one of the region’s classic backcountry whitewater destinations, and all the power and volume of a river descending from the mountains to the ocean over a distance of just 40 miles made the river an early candidate for hydropower development.

History of Hydropower on the Elwha

In 1882 the world’s first hydroelectric project began operation on the Fox River in Wisconsin and with it came ambitious plans to harness the power of rivers to generate electricity and fuel industrial development. Thomas Aldwell, one of the Olympic Peninsula’s earliest civic promoters and developers, located a “homestead” on the Elwha and quietly began accumulating the land necessary for the development of a hydropower project over a period of 20 years. Where the Klallam people, native to the river valley, had found a fishery resource that sustained their community, Thomas Aldwell looked upon the river and determined that it was “no longer a wild stream crashing down to the Strait; the Elwha was peace and power and civilazation.” As Aldwell worked to secure the financing, construction of the Elwha dam commenced in 1910. The dam was not anchored to bedrock but instead set on glacial alluvium—-“a dam on roller skates.” Shortly after construction in October of 1912, the dam failed in spectacular fashion when the river blew out through the gravel below the dam. Rebuilding commenced and by the end of 1913 the Elwha was no longer a free-flowing river as electricity flowed from the powerhouse to Port Angeles and beyond.

The Effort to Remove the Dams

Decommissioning the hydropower projects on the Elwha was a project that took several decades. By 1927 a second dam had been constructed at Glines Canyon which was subsequently included within the boundaries of Olympic National Park. In the mid 1980s as the Federal Energy Regulatory Commission (FERC) continued to slow walk the license applications for the two dams, local conservation advocate Rick Rutz made the observation that FERC did not have the jurisdictional authority to license a hydropower dam in a National Park. It took several years, but with leadership of the Lower Elwha Klallma Tribe most directly impacted by the dam, local river advocates worked with the tribe and ultimately succeeded in convincing the mill who owned the dams that they were a poor investment given the small amount of power they produced relative to their size and impact on the landscape. Ultimately Congress stepped in and in 1992 the audacious idea to remove the dams inched closer to reality with the passage of the Elwha River Ecosystem and Fisheries Restoration Act.

All that remained was the “small matter” of securing the funding for the project, a task that ultimately required two decades and a series of federal appropriations bills over the years. With a final shot of economic stimulus funding from Congress in 2009 with the American Recovery and Reinvestment Act, the project was finally underway in September 2011. As actor and river advocate Tom Skerritt looked out upon those assembled for the occasion and declared, “Elwha Be Free!” an excavator set to work and began to break up the concrete and dismantle the dam that Thomas Aldwell had worked so hard to build. In the end most agreed that this dam’s time had passed, and the environmental costs and social justice impacts associated with its continued operation greatly exceeded the small amount of power it produced. At the official ceremony to mark the occasion, Bureau of Reclamation Commissioner Mike Conner remarked, “Dam removal is not the best option everywhere but it is the best option here. and it’s the best option in a lot of places because the process that we are going through these days is we are reassessing the costs and benefits of certain facilities that exist today… I think this is not only a historic moment here but it’s going to lead to historic moments elsewhere across the country.”

The Elwha and Glines Canyon dams are now gone and a new landscape has emerged before our eyes. Where the stagnant waters of a reservoir once sat, a hungry restored river is eagerly devouring the mountains of sediment that were captured by the reservoirs for the past century. For anyone who enjoys rivers, the grand experiment that is unfolding is nothing short of fascinating and the public has had the opportunity to explore the new landscape. Massive salmon have been finding their way upstream and the river offers ample opportunities for exploration where one can witness first-hand what it means to restore a river.