American Whitewater Prevails in Case to Protect the Tuolumne River In a case before the United States Court of Appeals for the District of Columbia Circuit, American Whitewater and our allies prevailed to uphold the Clean Water Act in protection of the Tuolumne River. This year marks the 50th Anniversary of the Clean Water Act which requires that any utility applying for a hydropower license that may discharge pollutants into waters of the United States must receive state certification ensuring the project complies with all state standards for beneficial use, water quality, and anti-degradation of the waterway. The case brought forth by the Modesto and Turlock Irrigation Districts (the Districts) challenged a Federal Energy Regulatory Commission (FERC) order upholding California’s clean water certification for the Don Pedro and La Grange Hydropower Projects located on the Tuolumne River.

The Districts appealed FERC’s denial of their petition seeking waiver of the California Water Control Board’s authority to require that the projects meet state water standards, arguing that the Board did not “act” within the required time frame to issue a water quality certification and therefore waived their overall authority over the hydropower projects. American Whitewater believes the Districts’ petition was largely an effort to avoid mandatory conditions set forth by the certification which includes, among other conditions, restoring boatable flows on the lower Tuolumne and oversight of the construction of new recreation facilities negotiated for the Wards Ferry take-out. (See Wards Ferry article here.)

FERC led the response to the Districts’ petition in arguments before the US Appellate Court. They argued the State Water Board did not waive their authority and indeed acted within the required time frame to issue a water quality certification of the Don Pedro and La Grange hydropower projects. They were joined by interventions from the California Attorney General representing the State Water Resource Control Board. American Whitewater, Tuolumne River Trust, California Sportfishing Protection Alliance, Friends of the River, and the Sierra Club intervened in the case. Also, as a sign of the importance of state rights to protect clean water across our nation, 17 state attorney generals joined as amici curiae to assist in providing legal briefs.

In an opinion (see documents) filed by Senior United States Circuit Judge Arthur Raymond Randolph on June 17, the court agreed with FERC and the intervenors that the California Water Board did not waive its certification authority under the Clean Water Act.  This ruling paves the way for the completion of the hydropower relicensing process, bringing whitewater paddlers closer to obtaining restored flows on the lower Tuolumne and much needed improvements to the Wards Ferry take-out for the Meral’s Pool reach of the Wild & Scenic Tuolumne River. On a wider scale, this ruling sets an important precedent for our nation’s waterways establishing state authority to mandate protection of our rivers impacted by hydropower under the Clean Water Act. 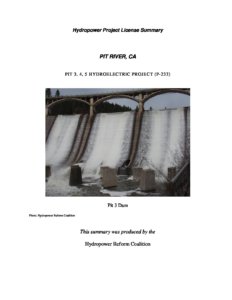